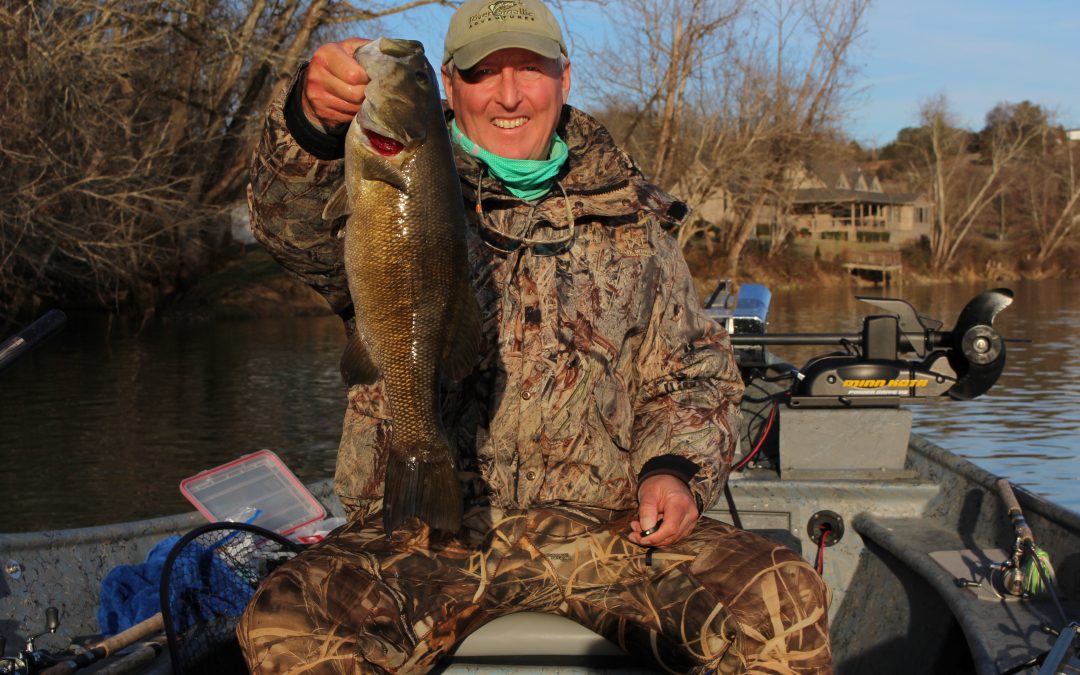 You look at the weather forecast with highs in the forties with a brisk wind out of the northwest and debate whether or not you want to fight the elements and fish today for those winter river smallmouth.To add insult to injury its January and the water temperatures on the French Broad River are in the mid to high forties. Common sense would dictate that when the river water is that cold that there is very little feeding going on and the bite will be extremely slow. But cold water river smalllies follow their own sets of rules and can be caught with some regularity if you are willing to put in the time and brave the elements. On this section of the French Broad River that I like to fish TVA over the past several days had been running two or more generators for a few hours during the middle of the day which made it much more challeging to find actively feeding concentrations of fish. I like to fish when TVA is operating 0 or 1 generators at Douglas Dam. On this day, they were going to operate two or more generators in the afternoon which allowed me an ample amount of time to fish during the time of reduced flows. I opted to fish first with artificials which included spinnerbaits and jigs tipped with a variety of sizes of Gulp Minnows. After a couple hours of fishing with only a white bass and a “mystery fish” that got away to show for my efforts I decided to fish some submerged woody cover near the bank with live bait. I had caught some nice smallies in this spot before, but only in the spring and early summer. To my surprise they also decided to feed at this location in the heart of winter. I choose to fish with live bait due to my lack of success with artificials earlier in the day. The presentation that appeared to work the best was to allow the live bait to swim freely and naturally in and around the cover. I added little or no action to the bait itself which appeared to improve the frequency of takes. I caught fish both in the gentle current downstream from the cover and also in the water with little or no current near the bank. I managed to catch ten smallies ranging from fourteen to seventeen inches in this one location. By this time, the water from another earlier release of two or more generators at the dam had caught up with me and I decided to make one more move downstream to see of I could end the day with one of those big river smallmouths. And that is exactly what happened. Pictured above is a 22 1/4 in. 4 lb. 10 oz. smallie I caught against the bank as the water was rising and the current was increasing in velocity. I would like to note the very next day I fished the exact same location and did not get one strike. The only difference was that TVA operated two or more generators that morning and I fished the spot later in the day when it looked just like it did the day before. However, I fished it just after and not prior to the release of two generators or more. Rapid changes in flows can significantly change the location and feeding habits of river smallmouth at any time of the year so patterning fish can be a challenge. But if you are willing to brave the elements and have the confidence that river smallmouth will feed in all types of cold water you might just catch the biggest winter river smallmouth of your life here in East Tennessee.