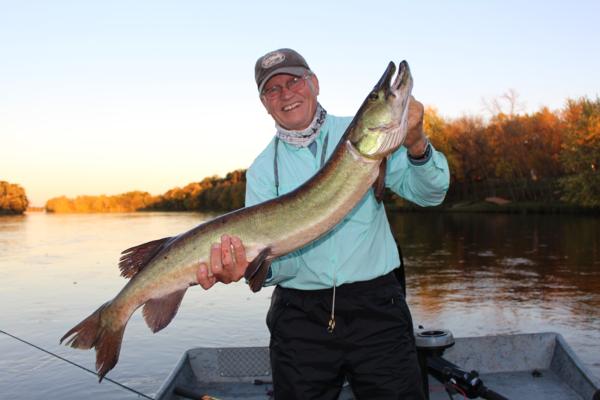 Jack joined me again for a second day of fly fishing for smallies, but we decided to change locations and fish the area around the confluence of the Chippewa and Flambeau Rivers. The evening before, in that same stretch of river I had a 16 in. smallie on when a Muskie grabbed it and raced downstream. It was peeling out drag and suddenly the line went limp. I assumed that the line was cut or the Muskie had simply let the smallmouth go due the pressure I was putting on the fish during the fight. But the hook, line, and bait came back essentially unscathed. Jack also likes to fly fish for Muskies so we decided that we would go to the spot and have him give it a few casts.

The Muskie had hit the smallie in the evening around 6 pm, but I figured this early afternoon attempt might be worth our while. Jack worked the spot well with no strikes or follows. He stripped streamers for rest of the day and caught some nice smallies. I told him that before we went to the ramp I wanted him to give that Muskie another shot around 6 pm. Jack said that he had completely forgotten about the fish, but was willing to give it another try. I quietly eased my Stealthcraft Power Drifter Sled into position and let down the anchor. This also is a spot that holds big smallies in the evening, so I pulled out my spinning rod and made a cast and just as my bait hit the water Jack excitedly exclaimed that he had the Muskie on. He said it hit on his second cast in the exact spot where I had what I assume is the same Muskie take my smallie the evening before. It was quite obvious from the bend in his 8 wt. fly rod that it was a nice fish. It peeled line off his fly reel and with the aid of the stronger than normal current due to the recent heavy rains and it was apparent that he was not going to be able to bring the fish to the boat while it was anchored.

So I raised the anchor and rowed towards the fish with Jack speedily reeling in his fly line, but still keeping steady pressure on the fish. When we finally caught up with the fish it shot under the transom, but Jack was quick to respond by working his fly line around my 80 HP Mercury Jet as it emerged out the other side of the boat without snagging the line on the motor or on the bottom of the boat. After a few more minutes the Muskie began to tire and it floated to the surface with its back exposed. Jack eased it to the boat and I slid the net under the fish. As it cleared the gunwale of the boat the fly which he had tied himself fell out of the Muskie’s mouth. Jack pinches down the barbs on all of his flies to reduce injury to the fish. The Muskie was 46″ long and was the biggest one caught on a fly that I have had the pleasure to witness in all of my years river fishing.